The Won't Do Nation 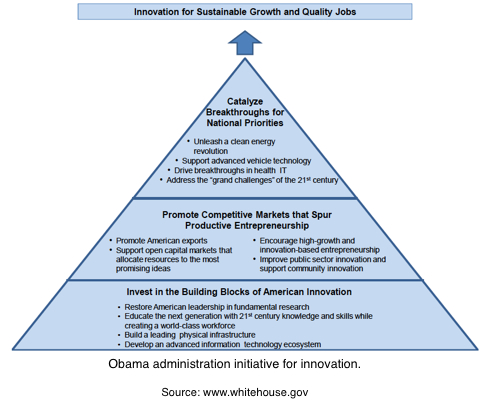 Way back in September 2009, President Obama went to Hudson Valley Community College in New York to give a speech on innovation.  The choice of location was interesting, as the southward journey of the mighty Hudson River tells a sequential story of the demise of the American economy.
The Hudson Valley runs due south from Albany to New York City. It is bordered on both banks by the tracks of railroads and the ancient mansions of families with names like Vanderbilt, Roosevelt, Delano, Astor and Rockefeller. On its southward journey it passes towns like Schenectady -- which Thomas Edison chose as the birthplace of GE. Then it moves further south past Kingston, Poughkeepsie and East Fishkill, which once housed more than 50,000 IBM employees in 3 bustling plants that built and tested mainframe computers and designed and developed advanced semiconductors. Those plants today are shadows of their former prosperity. Further south, it passes IBM's headquarters in Armonk, its research center in Yorktown Heights and continues to New York City, where it rolls past the palatial offices of investment banks and AIG.


So it was an interesting venue on that day 15 months ago when the President laid out a three-part plan to rejuvenate innovation in a country and a region that once set the bar for the world in technology innovation.  His plan called for:
1. Investing in the Building Blocks of American Innovation.
2. Promoting Competitive Markets that Spur Productive Entrepreneurship, and
3. Catalyzing Breakthroughs for National Priorities.
It was a bold and detailed plan that you can see in the accompanying diagram. It set as a priority restoring American leadership in fundamental research.  As we stand on the verge of continuing the Bush-era tax cuts, the idea of restoring our leadership in R&D seems remote. We appear to be a nation and an economy hell bent on cutting costs rather than investing in the kind of research and development that made us the most powerful and prosperous nation in the world for over a century.  While there are many who claim that stimulus plans rob future generations by burdening them with debt, it is hard to believe that the residual impact of cuts could exceed the negative impact of not investing in research and development required to create new jobs, revitalize industries, support education, create new industries and keep us focused on innovation in a world that is increasingly competitive.
We have always been a defiant nation. That has served our greatness when directed at outside threats.  But it serves to hasten our demise when used against each other. We seem to have forsaken the "Can Do" attitude that fostered more than a century of innovation along the banks of the Hudson River and across the nation. We have replaced it with a "Won't Do" attitude that divides us and defies any attempt to unify us in a common purpose to restore our greatness.  Has protecting wealth trumped stimulating innovation and the ability to compete globally?
Posted by Bill Bellows at 4:55 PM