It's Time to Usher Out the THUD Factor in Corporate Communications

Many articles and blog posts have been written about the various types of followers on Twitter.

For example, it's typical for someone who is brand new to Twitter to follow anyone who follows them - even if that follower has little or no reason to follow you or vice versa.  Social media strategist Greg Pincus calls this type of follower The Recipro-pal.  Another favorite of mine from Greg's list is what he calls The Aggressor -- out of the blue, they follow you.  If you've been on Twitter for a reasonable amount of time, you have experienced these Twitter follower types, and many other types as well.

Here's how I deal with the Recipro-pal and the Aggressor:  every couple of months I sort through my relatively modest list of Twitter followers to weed them out.  I feel I'm doing them a favor.  And I know I'm doing me a favor.

Last time I went through this exercise I blocked more than a hundred Twitter followers, which at the time reduced my number of followers by more than 15%.  Also blocked were the hard core selling types -- pay-per-click and SEO specialists, folks who assure me I can make a million dollars selling on-line, and the auto-DM crew.  Not that these people don't have something important to say. It's just that I'm not buying what they're selling and I know that they're following me for one reason and one reason only.

And every once in a while a prostitute slips through my Twitter filter and ultimately get blocked as well.

What floors me more even more than this, however, is that "clips remain king" in traditional media coverage.

Almost 74% of the respondents said the number of clips is the number one metric they use to measure the effectiveness of their traditional media campaigns closely followed by the number of impressions.  Unfortunately, it appears that our industry is still mired in the old way of doing things.  Are you experienced enough to remember the days of walking into your client's office with a six-inch thick clip book and dropping it on his or desk?  We called it the THUD factor then.  It appears, at least based on the Bulldog/Thompson survey results, the THUD factor is alive and well.

Earlier this summer the Institute for Public Relations (IPR), following its European Summit on Measurement, published the "Barcelona Declaration of Measurement Principles."

There's a lot of good information in the Declaration with  most being evolutionary - not revolutionary.

And here are two key points from it that I think corporate communications pros must pay closer attention to if our industry is going to show progress against the objectives set forth at the Barcelon conference:

Makes sense to me.  How about you?
Posted by Jim Barbagallo at 5:43 PM No comments: 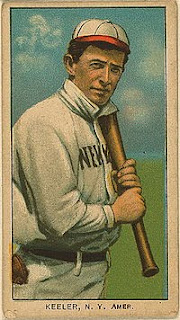 Back at the turn of the last century, there lived a great baseball player from Brooklyn named Wee Willie Keeler.  Wee Willie played for four teams and holds the 14th best career batting average in history.  He also is a long-time member of the Baseball Hall of Fame.  For all his accomplishments on the field, W.W. is perhaps best remembered for a quote. When asked about how to become a great hitter, his answer was "Keep your eye clear, and hit 'em where they ain't."


That seems a pretty good guide to a lot of things in life, including marketing content.  Knowing about the Wee Willie Way is why we were only marginally stunned last week when we read Joe Polizzi's blog at the excellent content marketing site, Junta42, telling us that print is back!


You heard me right. P-R-I-N-T. That five-letter word that sounds as old fashioned as, well, Wee Willie Keeler, might be staging a comeback.  Wasn't print too expensive?  Weren't newspapers too messy?  Books were too cumbersome and better left to Kindles and magical tablets like the iPad, and brochures...well, the stupid things just won't let you click through.  And where are the analytics and heat maps? The ROI and the keywords?  God, what will become of us if our only option is to, ugh, just read something?


I mean just as we are starting to figure out how to keep our snorkels dry in the Tsunami of the all-digital sea, this guy Polizzi says we might have to come out of the water and re-think our content plans.  He says there are seven reasons for this.  But, you know, the more I think about it, the more I start to wonder if he just might be right.  Polizzi says:

There is one more point Joe made, which is that print has been so overlooked and abandoned by content marketers that it just might be the cool new part of the marketing mix. Ultimately, Polizzi's reasoning is simply that opportunity exists where nobody else is looking. So that is how we get back to Wee Willie Keeler and hitting em where they ain't.  I think W.W. just might concur with Mr. Polizzi.
Posted by Bill Bellows at 8:17 PM No comments: