Cloud Computing: Risk and Value are Two Sides of the Same Coin

For every report that comes out with research pointing to cloud computing as the new IT panacea for enterprises, is a report with an opposing point of view.
The "he said, she said" nature of some of these reports is reminiscent of the early days of "SNL" and the "Point-Counterpoint" parody made famous by Danny Akyroyd and Jane Curtin. "Jane, you ignorant, misguided ...." .."Dan, you pompous ...."
Ok, perhaps the landscape isn't that contentious -- at least, not yet.
The latest report highlighting the unease many senior IT execs have with cloud computing comes out of ISACA, a U.S.-based organization for information governance, control, security and audit pros. It boasts 86,000 members in 160 countries, so its influence is far and wide. The ISACA tackles the cloud computing question in its first annual ISACA IT Risk/Reward Barometer survey and examines the results in a white paper it collaborated on with the Cloud Security Alliance. Of the 1,809 U.S.-based IT survey pros who took part in the survey, many work for Fortune 500 companies across engineering, financial services, education and health care. And most, apparently, are far from ready to take the cloud computing plunge.
Two key findings:

So even during this extended period of lean IT budgets, a period when CIOs are stretching their IT imaginations and IT staffs, a solution that is battled-tested in many areas is still in the proving phase for many organizations.

In the view of so many IT pros, cloud computing "just ain't there yet." On the other hand, market research firm IDC is saying that spending on cloud computing services will represent more than $44B in IT spending within three years and will outpace spending on traditional IT solutions through 2015.

"The bottom line is people are scared. Companies have failed spectacularly at this model," said Brian Barnier, a member of the ISACA risk IT development team.

Although nearly half of the IT pros participating in the survey are not sold on cloud computing for mission critical data, Robert Stroud, who doubles as international VP at ISACA and head of the service management business unit at CA, Inc., says IT pros need to remember that "risk and value are two sides of the same coin.

"If cloud computing is treated as a major governance initiative involving a broad set of stakeholders, it has the potential to yield benefits that can equal or outweigh the risks," added Stroud.

In a related side note, many of the IT pros said employees put their company at risk levels that exceed the risk of using cloud computing services. Fifty percent of the respondents said their organization's employees do not protect confidential data appropriately, for example.

I think the cloud could do better than that.

I watched with amazement, and some amusement, as more than 300,000 people bought the new Apple iPad on the first day it was available -- and it isn’t even 3G enabled! I find it fascinating to watch people rush to buy the latest and greatest tech gadget the day it comes out knowing full well that it will have glitches and bugs, and will fall far short of versions 2.0 and 3.0 in terms of performance.
I talked with a geeky engineer friend of mine last night who had purchased his iPad last weekend and he gave it a less than glowing review of “it’s OK.” “Wait’ll the next rev,” he suggested.

But who am I to talk. I did the same thing last November when the Motorola Droid, running the Google Android OS on the Verizon network was introduced. I actually contacted Verizon in advance of the Droid launch to place my order. That ensured that my Droid arrived in the mail the first day the new smartphone was available. And guess what? It did have glitches and bugs, and it did fall short of my very high expectations.

Then on December 11 of last year the next rev of the Android OS automatically installed on my Droid and all of the problems I had experienced disappeared. Wait’ll the next rev, I thought to myself.

So I found it a bit ironic that on Tuesday of this week, just 4 days after the launch of the iPad, my Droid once again prompted me to download a new version of the “system software.” Was Google responding to the iPad launch with some vital fixes to the OS, or was it packing new features into it to maintain its lead over the iPhone? I wasn’t sure, but the timing of the operating system upgrade sure was interesting.

It is becoming clear that the future of mobile communications will be a battle in which both Google and Apple will be featured prominently. The iPhone came first, but the Google-driven Droid has proved to be a worthy opponent. And while the iPad hit the market first, there are several similar tablets in the works, including the WePad from Germany-based Neofonie, that will use the Android operating system and access the tens of thousands of apps available in Android Market.

A source no less than Gartner Group is predicting that the Android operating system will surge to 14% of the smartphone market by 2012, putting it ahead of the iPhone, Windows Mobile and the Blackberry; second only to the Symbian OS used in Nokia’s devices which are popular in Europe and many countries outside the US.

And why is Gartner so bullish on the Android OS? The Cloud. Gartner gives Android such an enormous surge in popularity because of a variety of factors, but chiefly because of Google's backing of Android and the range of cloud computing functions and related applications that Google will make available in coming years.

Smartphone applications live in the cloud. Therefore, the smartphone with an operating system designed for cloud computing is likely to perform better, and work more intuitively, than an OS that wasn’t built with the cloud in mind.

To quote Ken Dulaney from that Gartner Group report, “…because Android and Google operate in an integrative and open environment, [they] could easily top ... the singular Apple.”

Yes, Google and Apple will continue to slug it out in both the tablet and smartphone markets. Both companies will make great products and both will market the heck out of them. But the winner may be decided by which of them better understands how to work within a cloud-computing environment. So far, that appears to be Google.
Posted by Steve Jursa at 5:12 PM 1 comment:

A Brief Investment Perspective of the Cloud 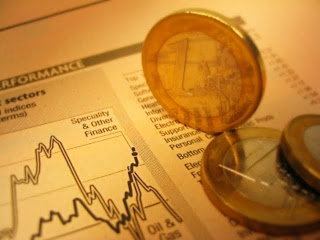 We've written extensively here at Beyond the Arc about the confusion surrounding cloud computing. Like anything with enormous potential, cloud computing is fueled by marketing hype, uninformed dialogue, informed dialogue and overstated expectations.  We only need to look back at last weekend's launch of the iPad to see how this scenario builds to a volume so loud that fact no longer is easily discernible from fiction and product or service delivery becomes the only control a vendor has on the hype cycle.

Who, I wondered recently, cuts to the chase in an objective and measurable way?  Then it struck me that investment analysts might be as much a realist as anyone in the dialogue because, depending on how you look at it, the cloud is either just an evolution of computing as we know it or a sea change in the history of technology and of business. Either way, the implications for investors will be notable.

One of the more informed articles I found was published recently by Morningstar, the global investment research company.  The article by Sonit Gogia, breaks the market into three commonly known segments:  infrastructure, platform and software as services and then tries to forecast value around each. Imprecise at this early stage, but worthy of consideration, Gogia's analysis suggests the following:

SaaS: Open Competition, Reduced Profitability
SaaS is the most mature of these segments and has proven its appeal, particularly with small and medium enterprises. It already is easy to foresee how changes in the economics of computing driven by the cloud can diminish the impact of enterprise software leaders like Microsoft, IBM, HP, SAP, Oracle and a few others in the same way that the shift from mainframe systems to client server computing in the 1990s threatened the business models of the mainframe market.  With Microsoft Office Web Apps scheduled for release in May, Microsoft already is playing catch up to Google Docs, which was used in 20% of the offices surveyed last year by IDC. While these same vendors are aggressively restructuring their business models toward the cloud, they are joined by many others in offering IT services simultaneously to many customers over the from remote data centers. While creating more choice for customers and weakening the lock-in model that ties some customers to costly, less-than-optimal solutions, SaaS isn't designed to be sticky in the same way long-term licenses and maintenance contracts are currently structured. Until a customer hits a critical mass of users, changing vendors is relatively cheap and easy.  As a result, however, Gongia believes SaaS will limit profitability and returns on capital compared to the levels investors are used to with traditional enterprise software vendors.

PaaS: Less Competition,Greater ROCI
PaaS vendors offer IT departments the ability to develop and deploy software applications in the cloud.  PaaS vendors offer software, servers, storage, networking equipment and management services. Unlike SaaS, the cost of entry is high to providers and the cost of changing vendors can be high to customers.  This is a young, emerging market, but Gogia believes the ultimate number of competitors will be few. IBM and Oracle will be entrants to a market already populated by Google's AppEngine, Microsoft Azure and Salesforce.com's Force.com.  Gongia believes these vendors will deepen the barriers to entry, and he forecasts high returns on invested capital for PaaS vendors.

IaaS: Fast Growth, Becoming Commoditized
IaaS vendors rent out processing power, storage, and bandwidth on-demand. This where Amazon Amazon Elastic Compute Cloud (Amazon EC2) and a few other companies have focused their offering to small businesses, medium businesses and departments of Fortune 500 companies. The appeal of IaaS is that customers can access and pay for computing capacity only when it is needed.  But, Gogia contends, it is destined to become a commodity -- hard to differentiate with low switching costs and, like most commodities, it eventually will migrate to price competition.

If the past repeats itself, as it is often does, computing after the cloud may not be all that different.  But the opportunity for established vendors to reposition themselves, for new companies to enter markets and for customers to gain greater control and flexibility at reduced costs may become  a reality.  Certainly, the opening act has been captivating, and it is exciting to anticipate what happens next.
Posted by Bill Bellows at 12:42 PM 1 comment: