Not All Created Equal

In the early days of the Internet, say circa 1996, any company that was involved with the “net” was lumped together into the same generic market with every other company during this modern day gold rush.

And the media wasn’t the only entity that failed to discern the significant differences between these new-breed companies. The big Wall St. investment banks were all too happy to guide any company that had a web site through an IPO. Sand Hill venture capitalists were actually advertising on billboards along Silicon Valley highways that they were offering money to any company with a “good idea.” And millions of small-time investors poured so much money into these unknown brands that many of them had billion dollar valuations based on no revenue at all! Then came the dotcom bust, the market settled down, and natural market segmentation finally became the order of the day.

We are seeing a similar phenomenon taking place today around cloud computing, albeit somewhat less frenzied than the "irrational exuberance" of the dotcom era. You are, however, just as likely to read a Wall Street Journal article today that lumps together radically diverse cloud computing companies just as the example above regarding the Internet.

Just as there were numerous strategies for using the Internet to conduct and drive business, there are a plethora of ways the cloud is influencing how businesses, especially in IT, are run today.

At 3Point we realize all cloud computing companies are not cut from the same cloth. We know that each company competes in smaller, segmented markets that address specific customer needs. We realize that the way Microsoft is pursuing the cloud with Azure is dramatically different then the way CA is approaching the market, and that VMWare is coming at cloud computing from a different direction than either of them.

Today, cloud computing is at the height of the Gartner Group “hype cycle.” But cloud computing, just as the Internet before it, is here to stay. Cloud computing will, and in many cases already is, changing the way ALL companies do business, including consumer-brand companies.

Understanding the way the cloud influences your business is key to long-term success as this market evolves. We’d love to hear your story on how the cloud is changing the way you look at your business; and the similarities, or differences, you see between the cloud today and the Internet 15 years ago.

IBM Gets the Cloud Opportunity, and Cloud Marketing

IBM wants to team with entrepreneurs to build a smarter planet.
Recently, I've read a number of articles asking if the world's biggest tech companies are still capable of innovation. Included in these discussions are companies such as HP, Dell, Microsoft, Cisco, Intel and Motorola, among others. And, of course, Apple -- which almost never ceases to amaze. It appears that Apple is poised to turn another industry on its head with its iPad, but that's another discussion for another day.
Also included in the discussion of the ability of giant tech companies to innovate is none other than IBM, the granddaddy of them all. In my view, this is another company that never ceases to amaze, that continues to generate shareholder value even during the darkest economic times, that is so self-aware to know almost instinctively what it is great at and what it should shed and moves more quickly than many companies one-fifth its size.
This week IBM announced a brilliant program that fosters the birth of new companies, the growth of emerging companies and the fortification of its Smarter Planet focus areas. To me, that's a win-win-win.
Under the "IBM Global Entrepreneur" program, IBM will support entrepreneurs and their early stage startups, free of charge, with access to industry-specific technologies (smarter water, smarter building, smarter healthcare) in a cloud computing environment. The participating companies must be privately held, have been in business for less than three years and must be building tech solutions that map to IBM's Smarter Planet.
In the early stages of the initiative, the company said it will provide cloud computing resources to the startups by way of Amazon's EC2 Platform but will move some of the applications to an IBM-managed cloud computing platform.
And typical to IBM, the company is covering all the bases by working with a bunch of VCs on this venture so that IBM gets connected to the most promising prospects.
"...it's clear that the company is making a concerted effort to bring unique IT solutions to market," said Mike Vizard, writing for CTOEdge.
Who said a company founded in 1896 and with a $166B market cap can't dance? The cloud is bringing out the best in tech innovation, and IBM is a leader in the pack.
Brilliant.
Posted by Jim Barbagallo at 10:01 PM 1 comment:

Using the Cloud to Get Out of Your Own Way 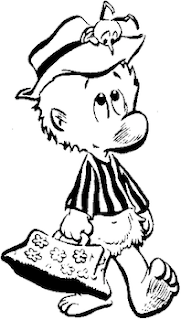 In the late 1990s, an incredible wave of change took place when increased global competition collided with widespread adoption of the Internet. Staid business architectures were capsized in the swell, and the only lifeboats to be found were being manned by IT.

A triage mentality ensued with one common refrain: "How fast can you have something that works available to us?"  The mandate was straightforward: Give us more functionality faster!

Of course, the business side saw themselves as IT's internal customer, disregarding the fact that IT had carefully constructed processes and were trained to follow a methodology of testing and refining creations that were not released until they were deemed perfect. This meant little to business teams in the new environment.  The response from IT was usually, "we can deliver, if we hire more engineers."  But this usually had the exact opposite effect. Projects got bloated and bogged down as more engineers came on board, and both the business side and the IT side were left in chaos.

The economic decline during the first decade of this century took care of some of the problem.  Meltdowns and budget cuts wiped out bloat and shortened the list of projects to be funded.  But it didn't change the need for speed + results.  In fact, it got worse.

Companies rediscovered their customers and flattened out development cycles by defining IT projects from the outside in. This raised the bar for quality and delivery time. The pace of change accelerated, and there was enormous pressure on IT to implement new solutions on legacy systems while not losing a step in maintaining those same systems.

That is about where many organizations are today.  But the bar has been raised again. Social media has fostered a need for transparency to customers (and everyone else). Every aspect of the business is more technology dependent, the pace of change continues to escalate and IT has to work faster and smarter with fewer resources with new software systems and tools on increasingly outdated systems.

The Enemy is Us
The cartoonist, Walt Kelly, who created Pogo, once penned the line, "We have met the enemy and it us."  That is the primary realization driving businesses to the Cloud. There are many compelling advantages to moving to the Cloud.  We have read them so often, we can recite them in our sleep:  increased flexibility, higher ROI, decreased complexity, and the ability to leap tall buildings in a single bound.  But none matter as much as Speed + Results in the Information Economy. Business schools like to call it Time-to-Value.

But how does an organization continue at this pace, when the problem can't be improved by throwing more resources at it?

A new approach is required and the Cloud seems to be the best answer. Yes, there are questions. But, the minute an organization comes to the realization that it can not keep pace with competition because of limitations in its approach to IT, the word "Cloud" sounds forth like a heavenly intonation.

I recently read a white paper from a leading Cloud vendor that put it this way: "Many CIOs struggle to explain to their CEO why implementing ERP took years and cost ten times more than the Cloud-based CRM application that went live within six months, with a comparable number of users, and a much more significant impact on the business."

If a company can implement software as a service in a fraction of the time required for traditional itnernal applications, SaaS becomes the obvious choice -- especially when aggregating internal resources can take months.  The idea of "renting" capacity temporarily for a large, long-term temporary project leads to the same conclusion for infrastructure needs.

Yes, these examples carry with them the inherent, oft-quoted benefits of the Cloud, but the one that matters most is delivering speed and results by letting an organization get out of its own way.
Posted by Bill Bellows at 1:40 PM No comments: