The 14th of July, the national holiday of France. A day filled with military parades, fireworks and patriotism. As I was watching President Nicolas Sarkozy reviewing the troops on the Champs-Elysées, I thought about the values of Liberté, Egalité and Fraternité and how France has provided universal healthcare, five weeks of vacation and a 35-hour work week for its citizens and wondered if it would follow Finland's lead and declare access to at least 1 megabit per second broadband a right for all citizens. Residents of Helsinki have had reasonably priced broadband access for quite sometime but rural Finns -- approximately four percent of the population -- have had to do without. And, without some form of government support, it would be prohibitively expensive to reach those four percent. What is interesting is not that the Finnish government is providing another benefit to its citizens but rather that it has realized that broadband access to the Internet is an essential development tool -- as essential as providing electricity to rural America was in the 1930s. Without broadband Internet access rural Finns would essentially be cut-off from the rest of the world. With it, they have similar access to commerce, culture, communication and information that their urban Helsinki countrymen have. Now that is what I call closing the Digital Divide.
Posted by Lee Lenhard at 8:20 AM No comments:

Email ThisBlogThis!Share to TwitterShare to FacebookShare to Pinterest
Labels: Internet

The Four Horsemen of Cloud Computing 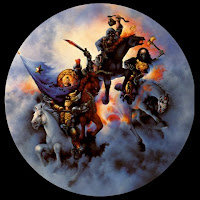 The first four of the seven seals, as described in the last book of the New Testament, represented pestilence, war, famine and death.  These four seals were depicted as beasts riding on white, red, black and pale-green horses.  These Four Horsemen of the Apocalypse, as they became to be known, were said to have been unleashed to warn of upcoming events -- including the Day of Judgment.

That is heavy stuff.

Ok, now fast-forward some 2,000 years, and we had the "lite" version of the Four Horsemen:  Cisco, EMC, Oracle and Sun Microsystems.

Much less intimidating than famine or death, and certainly not as serious, but still imposing in their own right.

These were the four companies who prior to the rupture of the Internet bubble, were firing on all cylinders.

EMC had reinvented and reinvigorated the data storage solutions industry.

Oracle was king of the database software world.

Cisco networked the universe and at one point became the world's most valuable company.

And Sun "the network is the computer" Microsystems was happy, for a time, to sell the world as many high-end servers as it could manufacturer.

As a result, Wall Street had christened these companies the Four Horsemen of the Internet.

Today, three of the four continue to dominate their market segments while one has been subsumed by the other and lives on in technology only, no longer in name.

Although three of the four companies that comprised the Four Horsemen live on, The Four Horsemen of the Internet is done.  It's time has come and gone. Their 15 minutes of fame behind them.

Make way for the The Four Horsemen of Cloud Computing.

In alphabetical order, here they are, the Four Horsemen of Cloud Computing.

Google: "the elephant in the cloud."

But wait a minute. That's only three horsemen.

Do you agree that we need a fourth?

If you do, please weigh in.

The cloud computing company that gets the most mentions will become the fourth horseman of cloud computing.   And you'll get the satisfaction knowing you helped make it happen.
Posted by Jim Barbagallo at 10:23 PM 3 comments:

It Can’t Be Said in 140 Characters

It goes without saying that social media – such as Twitter, Facebook, LinkedIn and numerous others – have changed the way we communicate with one another, share information, and learn of breaking local, national and international events. Who can forget the barrage of tweets coming out of Iran in June 2009, following the presidential elections and subsequent protests and violence that broke out after it was announced that Mahmoud Ahmadinejad had been re-elected. Then Twitter and YouTube brought us the news that a young woman named Neda was killed by Iranian forces during the protests thus bringing to the world a human face to the terrible violence. More than half of the world’s population now gets its information – everything from national news to sports scores to weather reports – from the Internet or on their smartphones. Couple that with the rapid exchange of ideas via social media and you have an environment where everyone, everywhere in the world, is not only a consumer of content but a publisher of content as well. You may have a poor experience with valet parking at your favorite restaurant and decide to share the event on Foursquare. Your friend sees your post, and decides to eat at a different restaurant the next time they’re in the city. They in turn give the new restaurant a rave review and within months the new eatery has a weeks long reservation list. Instantly, the fortunes of businesses can be changed as a result of social media. But some people are beginning to question whether the Internet and our dependence on digital information – everything from Google to Twitter – is actually stunting critical thinking and sound reasoning. In his recent book Shallows, Nicholas Carr explains, “how the printed book served to focus our attention, promoting deep and creative thought. In stark contrast, the Internet encourages the rapid, distracted sampling of small bits of information from many sources. Its ethic is the ethic of the industrialist, an ethic of speed and efficiency, of optimized production and consumption – and now the Net is remaking us in its own image. We are becoming ever more adept at scanning and skimming, but what we are losing is our capacity for concentration, contemplation, and reflection.” As someone who works with B2B technology companies, and produces content for them on a variety of topics, I know that there is some corporate information that can effectively be communicated via social media and the Internet, while other information is simply too complex, and requires too much explanation for this medium alone. Here’s a quick example. A B2B company is involved in a complex software licensing agreement with a company in France that it both competes against and does business. The European Union questions whether the licensing agreement impedes fair competition and decides to bring both companies before a commission to study the situation in more detail before making a final ruling on whether the licensing agreement can continue as is, if it needs modification or if it is breaking the law and must be scrapped altogether. This type of situation happens all the time with B2B global technology companies and explaining the intricacies of these situations to the audiences who need to know what’s going on simply can’t be accomplished in a 140 character tweet, 750-word blog entry, 20-page bulleted eBook or 2-minute YouTube video or Podcast. That’s why any comprehensive content-centered public relations plan needs to account for white papers, technical documents, financial reports, legal briefs and other lengthy tomes that provide enough room to adequately cover a complex subject in detail. The majority of the world’s people may be communicating with one another at speeds faster than ever before in human history, but the issues and challenges facing business today are as complicated and complex as ever before and demand our ability to concentrate, contemplate and reflect before we make decisions that could affect the future of our companies. Despite access to social media and instant information, we as professional communicators must take the time to slow down, think, capture our thoughts in detail and share them in documents that provide ALL of the pertinent information available; not just the 140 character sound bite.
Posted by Steve Jursa at 11:58 AM No comments: