The Generation Gap is Shrinking When it Comes to Digital Privacy 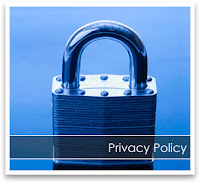 More and more people, across generations, are learning the hard way that the posting of certain kinds of personal information on social networks can be a bad idea.

As we age, do we become more private?  Do we become more protective as we accumulate more things in our lives, like a reputation built over a lifetime, material wealth or opinions we'd rather not share with the world but only with the closest of friends?

If the results from a new report from technology and market research firm Forrester Research, Inc. hold true, then the answer to these questions is "yes."

Credit social media with helping to bridge the generation gap among Baby Boomers, Gen Xers and even Millennials (to some extent, anyway) on at least one important issue -- digital privacy.

It appears that no matter how old we are, we spend some time worrying about social media-related privacy.  And the older we are, the more time we spend worrying about it. 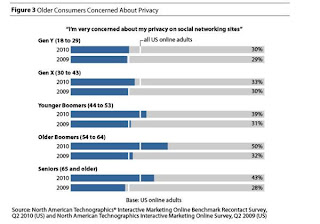 While 18 to 29 year-olds -- aka Millennials -- are the least concerned (as you might expect since the use of social media is in their DNA), even their privacy concerns increased over a year ago, according to the Forrester report.

Baby Boomers, as you might assume, are the most concerned about social media-related privacy --especially the older boomers, aged 54 to 64.  Their privacy concerns jumped from 32% to 50% in a single year.  Younger boomers (44 to 53 years of age...and includes me!) express somewhat less concern and are more closely aligned with the attitudes toward online privacy as Gen Xers (30 - 43).  With that said, privacy concerns for both younger Boomers and Gen X also increased over 2009.

Companies like Google and Facebook are constantly in the news due to digital privacy issues.  Google recently created a privacy-centric fund and donated $8.5M to it largely as a result of the mishandling of its Google Buzz launch last February.  And Facebook, it seems, is forever digging out of the privacy holes it creates for itself.

Social media is evolving and so too are users' attitudes toward it. Backlash against social networks dictating privacy policies to customers is growing stronger.

Older Gen Xers aren't too far away from the half way point in their lives.  And as Sid Yadav of VentureBeat points out, it would behoove Facebook to "figure out a middle ground on privacy before its first users reach middle age."
Posted by Jim Barbagallo at 4:11 PM