Public and Analyst Relations Should Be Housed Under One Roof 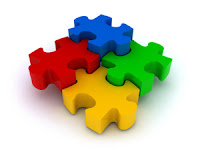 An increasing number of technology companies are seeing the wisdom in assigning public relations (PR) and analyst relations (AR) under the same in-house communications manager. That is, at least, the observation here at 3Point.

In recent weeks we've met with a number of companies who have asked us to include a treatment of market analysts, aka industry analysts and never to be confused with financial analysts, in RFP responses and proposals.

I don't know if I'd call it a trend quite yet.
And things could flip the other way -- housing PR and AR in separate departments within the same company -- at any time.
But for now, I'm going out on a limb and saying that more companies are integrating the reporting responsibilities and activities of their in-house PR and AR teams.  To me, these are companies that get it.
If you've worked at a PR agency for some time, you've probably had this experience:  you're meeting with a prospect and talking to the chief communications officer or head of corporate communications to understand their communications challenges and needs.  You ask about how AR is handled.  The communications chief grimaces and reveals that AR sits elsewhere in the organization, sometimes even reporting into the the office of the CFO.
What?  The CFO?
In most cases, the head of communications wants to own AR.  One reason is that at many large companies, AR pros are considered to be more "strategic" than the PR folks (subject of a forthcoming post) and their compensation may reflect this. Also, AR budgets can be substantial as they must fund "paid" analysts relationships.  So it's the golden rule: he/she who has the gold, rules.
But there are other, more concrete and important reasons why a corporate communications chief wants and should have responsibility for both. A proactive, well-managed and quantifiable AR program works hand-in-glove with a PR program. After all, the two programs are striving to meet the same goals.  Here are just a few:
I'd love to hear your opinions on this issue.
Posted by Jim Barbagallo at 11:21 AM