LeBron James is Among the Savviest of Content Marketers 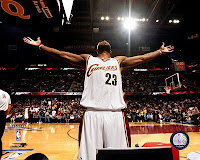 Like millions of other Americans and basketball fans around the globe, I'm eager for closure.

NY Knicks? Stay with the Cavs? Join the Bulls in the Windy City? Or perhaps it will be the Heat in Miami?

Oh where, oh where will LeBron James, aka King James, play for the 2010/11 basketball season and the foreseeable future.

Well, unless you have been truly off the grid and vacationing in say, the Peruvian Amazon, then you're aware of James' prime time announcement tonight on ESPN at which point (9 p.m. ET) he will reveal which NBA team he will play for.

While we wait, James can lay claim to being the subject of the most hyped free agency in NBA history.

It's an award that will look handsome enough alongside his many other awards, which include Rookie of the Year, two Most Valuable Player awards and his membership to multiple All-NBA and All-Star teams.

Despite his "King James" status, this king has yet to earn the crown that most NBA players covet above any other -- an NBA Championship.

And it really doesn't matter other than to the purest of NBA fans if he ever wins a championship.  He's King James, crown or no crown, because everyone says so -- fans, TV and radio broadcasters, his team mates, competitors, sports writers, his mom.

So how does he do it?  How does he get us to watch tonight?

Well, perhaps above anything else, LeBron James is a brilliant content marketer.  In the same class as Tiger Woods (at least before Tiger's crash) but perhaps savvier since James has won the world's attention and pocketbooks without winning the big one while Woods has a truckload of of trophies from winning golf's Majors.

In a post today, Joe Pulizzi, a founder of content matching site Junta42, reminds us that we are all media companies -- publishers of content. And whether you like LeBron James or not (I happen to like him though the ego can be a bit tough to take), B2B and B2C companies can learn from how James has built his tremendous brand.

Create great content and tell a story (tonight, LeBron tells his story live to his fans)

Put a line in the sand and say something interesting and thought provoking (as Joe points out, James has never been a media darling).

Use a range of communications channels to converse with your customers.  Find out where your customers are.  And go there (James talks to his fans via Facebook, Twitter, his web site, and on TV a few hours from now).

Closure is just around the corner.

Posted by Jim Barbagallo at 5:19 PM