Will the Cloud Save Journalism? 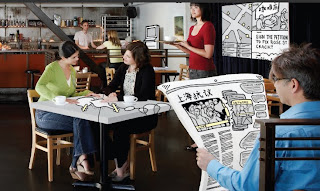 Do you ever struggle with defining the line between content and news?
I could justify the blurring border easily if I look only through my commercial lenses. But that seems self defeating, because the question ultimately brings into play the foundation of democracy:  What happens to the press' role as the Fourth Estate when the news media experiences the kind of rapid decline we've witnessed over the past decade?
The emerging void in journalism should worry all of us. The Project for Excellence in Journalism's recent annual "State of the News Media 2010" report, indicated 5,900 newspaper jobs were lost in 2009 (in addition to a similar number in 2008). The overall impact is a 33% reduction in newsroom employment at newspapers since 2001.  In the same time, there have been 450 jobs lost at local TV news operations.  We've seen major dailies shutter their doors and major news magazines like Newseek placed on the auction block.  We've seen this offset with an incredible number of bloggers -- only a handful of whom are legitimate journalists.  But can a disaggregated array of bloggers -- many of whom represent corporate interests rather than independent, objective journalists -- serve as the new Fourth State?  And if not, what is THEIR role?
Not surprisingly to regular readers of this blog, we believe the cloud will serve a valuable function in rebuilding the Fourth Estate, enabling the high costs of printing, publishing and physical distribution to be contained while restructuring advertising models. We see an interesting new vision that integrates journalism and neojournalism in projects like Newsflash from Future News: What Will Journalism Look Like?, published last year by the design experts at IDEO.  We see exciting possibilities for media in new technologies like HP's MagCloud, and we see user friendly delivery systems emerging with the new generation of eReaders like Apple's iPad and Amazon's Kindle. Technologies and ideas like these involve audiences, diversify content, expand ideas, accelerate the creation and delivery of information into a continuous two-way stream and provide us with relatively familiar formats for accessing information with the touch of an icon regardless of where we are in the world.
But journalism doesn't exist without journalists. The question that worries us most is whether news media can shed the crushing costs of traditional brick and mortar publishing overhead and embrace these new models fast enough to begin reinvesting in their depleted editorial staffs?


Image reprinted from Newsflash from Future News: What Will Journalism Look Like? © 2009, IDEO
Posted by Bill Bellows at 1:52 PM